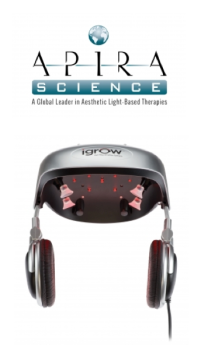 The clinical trial, led by Raymond J. Lanzafame, M.D., M.B.A., F.A.C.S., a board-certified surgeon and expert in laser applications and laser research, was a controlled trial to define the safety and physiologic effects of LLLT on female hair follicles and surrounding tissue. Forty-two women submitted to the study, ranging in age from 18 to 60. All participants were afflicted with varying levels of androgenetic alopecia, with skin phototypes classified as I to IV on the Fitzpatrick scale and with Ludwig Baldness Scale Classifications of between I to II. Subjects were randomly assigned to either the active laser/LED group or the placebo group. All participants were given an iGrow wearable system to take home and use four times per week for 25 minutes per session.

“The study sought to determine the percent increase in terminal hair counts in women from initial use to final treatment,” said Dr. Lanzafame. “While the study of LLLT as a solution to hair loss is ongoing, this trial yielded results quite similar to those in our men’s trial and highlights laser/LED therapy as a viable treatment for increasing hair counts in women.”

“Androgenetic hair loss is not limited to males; both men and women suffer the physical and emotional stigmas associated with this condition,” said Jeff Braile, President, Medical Device Division at Apira Science, Inc. “Due to the success of the iGrow Hair Growth System in treating pattern baldness in men, we have been studying the effects of in-home LLLT in women to better support this underserved population. We are pleased with the findings of our all-female study, as it validates LLLT as an extremely efficacious treatment option for healthy women with androgenetic alopecia. Based on these results, we expect to receive FDA 510(k) clearance for women in the coming months.”